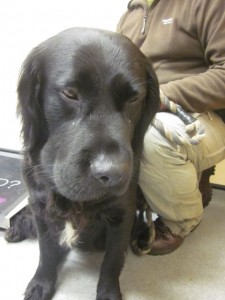 Toby was having a good root around in the bushes up on the Chase when he suddenly darted out as though something had happened to him. It wasn’t long before he began to retch and stagger, he became groggy and his face began to swell. His owners managed to get him back to the car and brought him straight to see us for treatment. Examination confirmed poor Toby had been bitten by an adder, even though it’s late in the season for snakes to be active. Whilst adder bites are rarely fatal, he was immediately given anti-venom and pain relief to relieve his symptoms. This is Toby just an hour after being bitten, still swollen and very sore. Hope you are feeling much better!