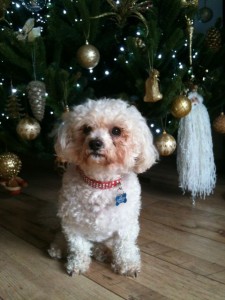 Pippin, a seven year old bichon frise, is our pet of the month for January 2012.  He came to us as he had been having difficulty using his back right leg. On examination, it was clear he had ruptured his cranial cruciate ligament – one of the knee’s two stabilising ligaments. Pippin was doubly unlucky though, as while he was coming to terms with coping on three legs, he ruptured the same ligament in his other back leg – within just three weeks of damaging the first! Poor Pippin could barely get about at all.

Cranial cruciate ligament injury in dogs is not uncommon. In young dogs it is usually caused by a traumatic episode, for example, landing badly when jumping or twisting the knee awkwardly, similar to sporting injuries in humans. In middle aged to older dogs, however,  it can be caused simply by general wear and tear. Complete rupture of the ligament leads to considerable joint instability in dogs, whilst partial tearing or stretching of the ligament can cause a lot of pain. Many dogs that suffer with one cruciate ligament injury go on to have problems with the other, but it is very unusual to totally rupture both in quick succession like Pippin.

What happened to Pippin?

Pippin didn’t have an accident or fall but merely suffered from ligament ‘fatigue’. Both his ligaments completely snapped, leaving him unable to manoeuvre or support himself on his back legs. We operated on his weakest leg using a titanium implant and orthopaedic fiberwire® system. This immediately restored joint stability and rapidly allowed him to use the leg again. He is recovering extremely well and is once again a happy, mobile dog! 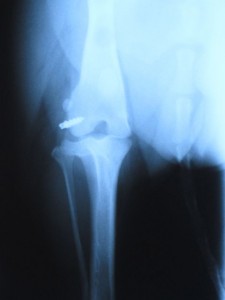 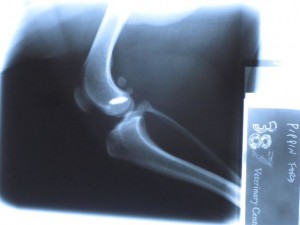