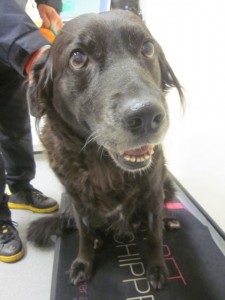 11 year old Cassie came to see us with a bleeding swelling protruding from her vulva – a really gruesome and alarming sight for her owners. Initially we thought she had had a prolapse, but after further examination and trying to manipulate the swelling it became clear the dramatic protrusion was in fact a tumour. 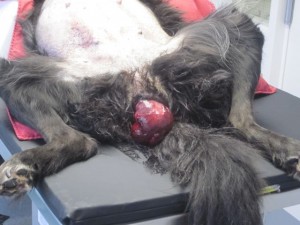 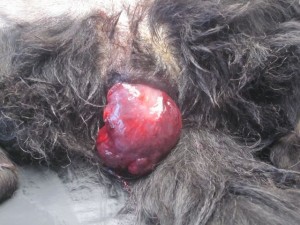 With some difficulty, the bulk of the swelling could be drawn out and exposed externally and was subsequently removed in theatre. 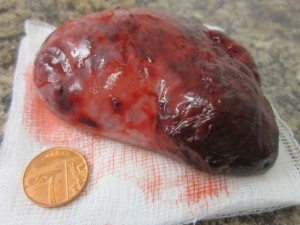 Cassie’s tumour alongside a one penny piece

Though vaginal swellings and tumours are rare, when they do occur they most commonly appear following a bitch’s season.  As Cassie had just been in season, we decided it was safest to spay her to prevent any subsequent tumours developing.

Some swellings are not tumours but simply the enlargement of an organ or tissue through the growth of the existing component cells (hypertrophy) and these resolve with time.  In Cassie’s case, however, because of the bleeding, we had to remove the growth to prevent further problems and complications.

Cassie’s surgery was successful and we are delighted that she has made a full and comfortable recovery.