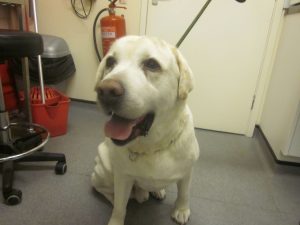 This is 9 year old Oaken who was on the way to the vets with a bad leg when somebody ran into the back of the car he was travelling in.  An ambulance was called for the dog’s owner, but they wouldn’t get into the ambulance until they knew Oaken was safe.  Nicky and Jodie went to collect him, and brought Oaken back to 387 Vets for the afternoon until his owners had finished at the hospital.  We were very relieved to hear everyone was ok – and that includes Oaken too!  We look forward to seeing him again for his appointment later this week, hopefully in less dramatic circumstances!