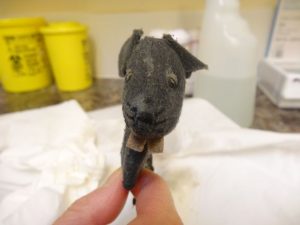 Poor cocker spaniel Bertie came in to see us on a Friday evening (the night England were playing Scotland in the football!) feeling very sorry for himself . He had been vomiting and had gone off his food, and on examination, Hamish thought he could feel a foreign body in Bertie’s abdomen. X-rays confirmed there was something suspicious in Bertie’s guts though at that point we couldn’t quite see what.

We took Bertie into theatre on Friday night after closing up the practice and removed the obstruction which had been blocking his guts and which had been stopping him from keeping food down and digesting anything and from going to the loo. Without surgery, Bertie would have died.

Imagine our surprise when we cleaned up what we had extracted to find the cause of the trouble was a finger puppet!

Bertie was discharged on the Saturday morning. He was much brighter and was delighted to see his owners and left the practice with a very waggy tail!

Bertie was in for his last post-op check on Friday: his wound’s healed really well and his owner says he is better than ever. Big hugs to Bertie – we’re so pleased you are back to your bouncy self again, and thank you for the biscuits you brought us! Much much yummier than a finger puppet!