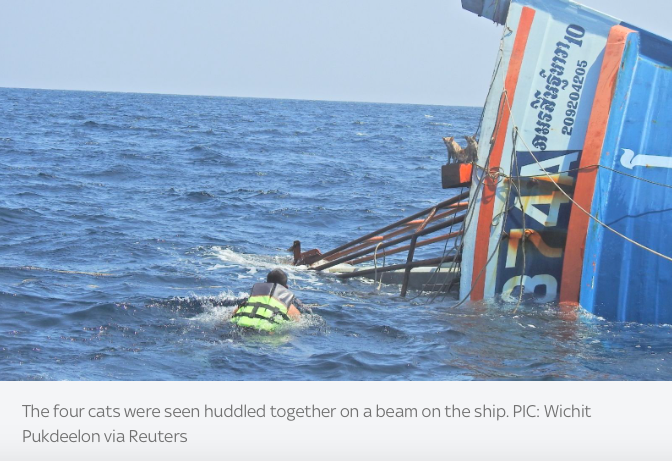 Happy ending for cats in peril

A lovely heart-warming story for this week’s feline Friday post! The Thai navy were called out to a capsized vessel in the Andaman Sea this week to check for an oil spill after a fishing boat caught fire and started to sink. By the time the navy arrived, the crew had already been evacuated. However, when one of the naval officers used his camera to zoom in on the boat, he spotted there was still life on board. Four ginger cats were precariously perched on one of the beams. And so ensued a rescue mission to save the frightened cats. One of the navy sailors swam out to the boat and carried the cats to safety on his shoulders with his team pulling him back in by rope.

The cats suffered no injuries and are all reported to be fit and healthy. And they now have a new home being cared for by the officers who saved them. Click here to see the kittens and their new owners in the BBC’s news story about the rescue. We love happy endings!