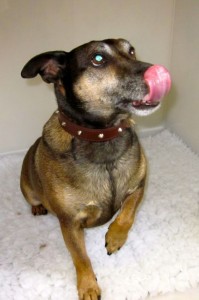 Bruiser’s owners were very worried about a large lump that had been developing on the side of his chest just under his front leg. After examination we were able to identify the lump as a lipoma (a benign tumour of fat) and we confirmed diagnosis via a needle aspirate (biopsy).

Fatty lumps like Bruiser’s rarely require removal because they pose no threat to the patient. However, when they occur in the ‘armpit’ area or the groin, they often grow to a huge size and can become a significant hindrance to a dog’s ability to run freely without discomfort.

Bruiser’s lump was already quite sizable so, after discussion with the owner, we decided to remove it before it became a physical impediment. 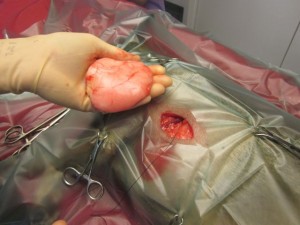 Lipomas are usually quite easy to remove but when as large as Bruiser’s, they leave a big cavity. Bruiser’s lipoma weighed 150g which is the equivalent of a small tin of baked beans! The challenge of the surgery is closing the remaining cavity and eliminating what is known as ‘dead space’, to prevent fluid accumulating in a large pocket under the skin. 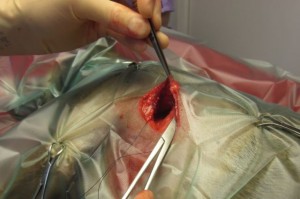 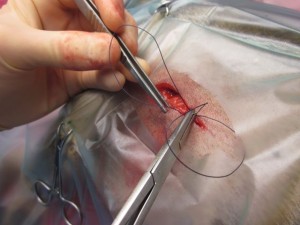 Many dogs will develop completely harmless lipomas in their lifetime, and the mass often feels soft, slightly wobbly and almost like gristle under the skin.

The majority of lumps in mature pets will be benign but it is always best to have any inexplicable growths checked to ensure there is not a more sinister condition present.