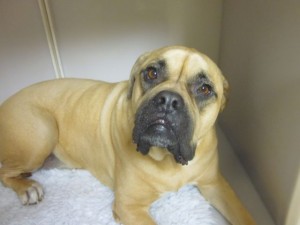 Two of our Veterinary Nurses dropped everything, grabbed the on call bag and rushed to the car when they received a call from a bullmastiff’s owner in distress.  The owner reported seeing 5 year old Sky chasing a bee then moments later spitting it out, shortly after which she collapsed.

On reaching the house, Sky was struggling to breathe and was cyanotic (her tongue was turning blue), indicators that she had been stung somewhere in her mouth or throat and that her airways were dangerously compromised. On arrival at the practice she also vomited and was drooling substantially, further signs that Sky was suffering from anaphylactic shock

Amazingly, the adrenaline created by Sky’s whole experience initially helped to alleviate her symptoms.  However, relief was only temporary.  We administered steroids to combat swelling and to manage her body’s shock and monitored her very closely for any further deterioration in her condition.  Thankfully, Sky made a full recovery and we imagine bees will now very definitely be off the menu in future!

What is anaphylactic shock?

Anaphylactic shock, or anaphylaxis, is a serious, acute allergic reaction.  Whilst symptoms and consequences of anaphylactic shock differ in dogs to other mammals, it’s still just as much of a life-threatening medical emergency in dogs as in people.  If not treated quickly, anaphylaxis can rapidly cause abnormal heart rhythms, serious respiratory distress, collapse and death.

Why does it happen?

First contact with a substance perceived to be harmful to the dog (an allergen) triggers a response which puts the dog’s immune system on heightened alert in case of a second exposure.  If a dog does come into contact with the allergen again, the body responds very aggressively, activating and releasing what are known as inflammatory mediators.  However, instead of combating the allergy, they have a massive negative effect, attacking the body in an attempt to expel the allergen.

Inflammatory mediators can cause arteries and veins to stretch and become leaky, blood pressure to drop, fluid build-up in the airways and throat, respiratory abnormalities, irregular heart beat, gastrointestinal distress and extreme itchiness and pain.  Dogs can become critical in a matter of minutes.

What are symptoms to look out for?

The onset of initial symptoms will be very rapid and may include diarrhoea, vomiting, itchiness, development of a raised rash over the body (hives) or needing to urinate/ defecate frequently.  Symptoms then progress to one or more of those more typically associated with anaphylactic shock:  lethargy, rapid, shallow, rasping breathing, pale gums, a weak pulse, cold limbs, a high heart rate, drooling and a change in normal temperament.

What can trigger anaphylactic shock?

In Sky’s case, she had a massive adverse reaction to an insect sting, but dogs with a specific hypersensitivity can react negatively to almost anything depending on their own immune system.  Anaphylaxis can be caused by pharmaceutical injections or vaccines, topical parasite treatment, dietary components or environmental elements such as mold, pollen and even dust.