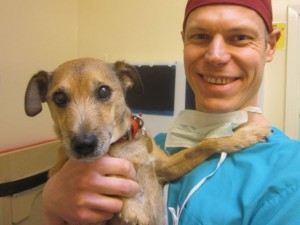 Freddie’s owner brought him to see us as he felt Freddie just wasn’t his usual self. He was lacking his normal energy and appetite.

After examination, subsequent blood tests and a biopsy of one of Freddie’s lymph glands, we had to break the horrible news that sadly Freddie had lymphoma, a type of cancer that starts in the lymph system but can affect the rest of the body. Left untreated, Freddie’s life-expectancy would be approximately 3 months from diagnosis, but with chemotherapy this could be extended to between 12 and 18 months.  After discussing the options, Freddie’s owner was keen to treat the cancer.

13 year old Freddie responded extremely well to his course of chemotherapy in which he received a combination of tablets, intravenous injections and intravenous infusions over a 25 week protocol. 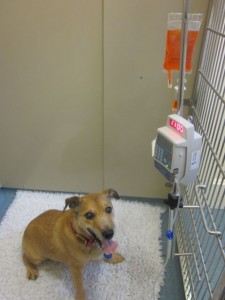 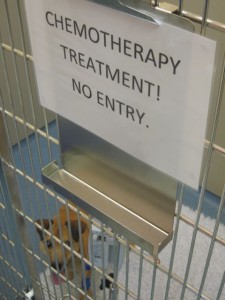 Freddie receiving his last treatment session at the end of November

Freddie reached ‘remission’ (i.e. clear of identifiable clinical signs of cancer) within only a few weeks of starting the treatment and continues to do well now the full course of treatment is complete.

Is chemotherapy the same for people and dogs?

Lymphoma is a common form of cancer in dogs and is the type of cancer that responds best to treatment. Although we use the term ‘chemotherapy’, courses designed for dogs are very different to those for humans – they do not cause hair loss, vomiting or illness. However, unlike chemotherapy in humans, we very rarely achieve a ‘cure’ in veterinary medicine – the aim being to restore quality of life and extend the life expectancy.

At 387 Vets we use a popular protocol known as the ‘Wisconsin protocol’ and have had an excellent response in a number of cases.