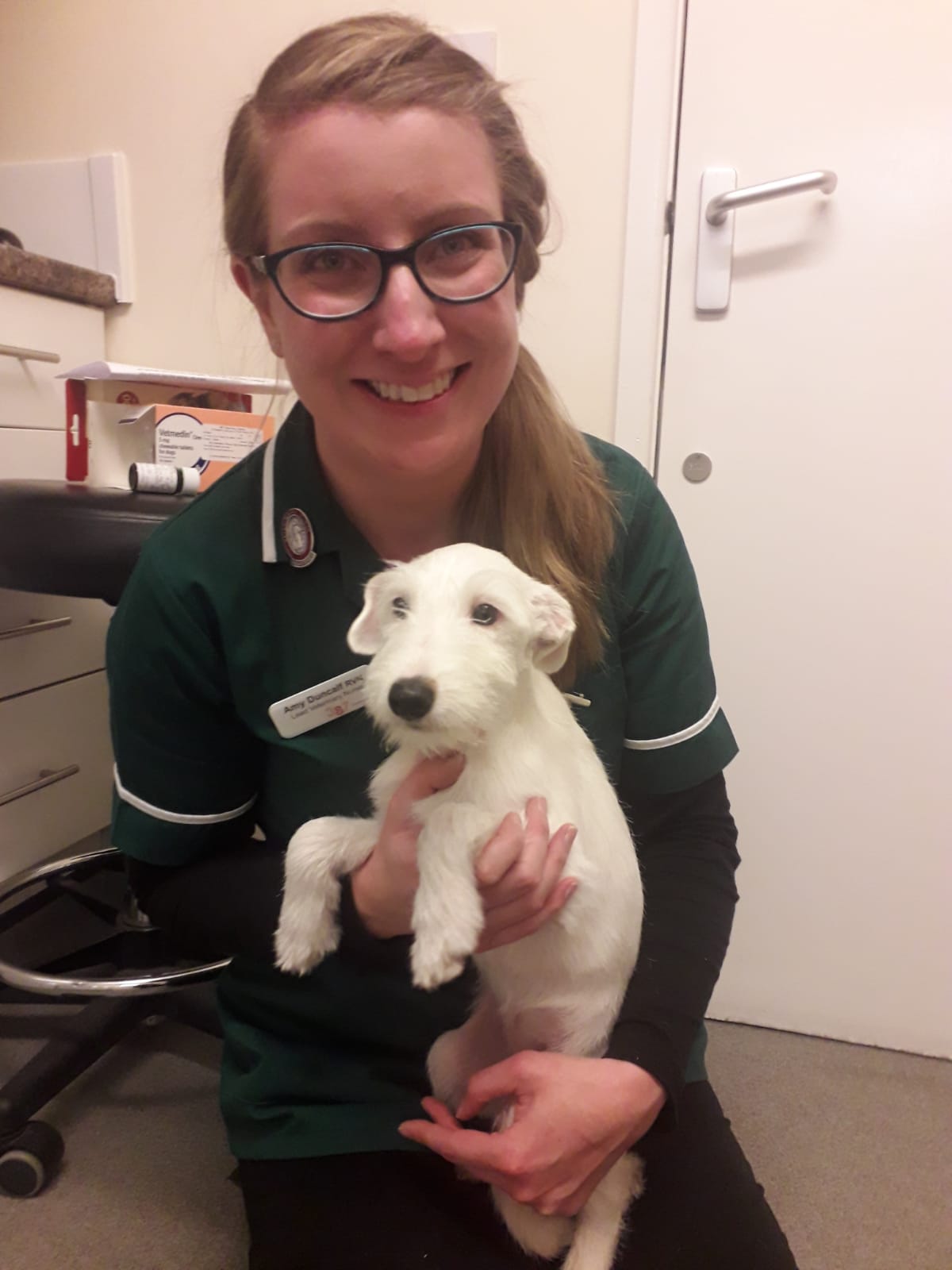 This is little Peg, our February Pet of the Month, who is thankfully all better after a life-threatening lungworm scare. Read Peg’s story below, and find out how you can protect your dog from this deadly parasite.

The Jack Russell pup came to see us with her brother Roger for their 6 month nurse check-ups just before Christmas. Whilst her brother was doing well, Peg’s owners were worried that she was struggling with teething: she wasn’t eating, was quite lethargic and wasn’t putting on weight. Her gums looked red and inflamed and her owners reported she had been trying to rub her face, and seemed shivery too. Peg’s symptoms were concurrent with tooth pain – her adult teeth were still to come through – so we gave her some pain killers and advised that Peg should come back and see a vet if there was no improvement.

A couple of days later, poor Peg came to see our vet Selenia as her condition had deteriorated. In addition to her earlier complaints, her breathing had become faster and shallower and Selenia could hear crackling on Peg’s chest. She had also lost weight. Peg’s owners confirmed that she had been digging in the garden before getting ill, which, together with her symptoms, raised alarm bells about lungworm. We ran some blood tests in house which confirmed Selenia’s suspicions, and we started life-saving medication immediately.

Peg responded really well to treatment. Just two weeks later, she was her normal self, eating well and rapidly putting on weight – and enjoying her puppyhood again. A huge relief for all!

There are several species of lungworm carried by dogs and foxes, but Angiostongylus vasorum is the most serious. Formerly known as French heartworm, this parasite lives in the heart and blood vessels of an infected animal, where it lays eggs that get carried to the lungs and hatch as larvae. Adult worms in the heart, and larvae in the lungs can cause serious tissue damage which can sadly be fatal.

How do dogs become infected?

Slugs and snails may carry the larvae if they have passed through an area where an infected dog or fox has toileted. If your dog ingests an infected slug or snail, or drinks or plays where they have left a slime trail, they could also become infected with lungworm.

What are the symptoms?

Lungworm can initially be difficult to detect. Symptoms are similar to many other conditions, and can include breathing issues (with or without coughing), lethargy, unexplained weight loss, being off colour, seeming depressed and even fitting. There may be abnormal blood clotting too. In Peg’s case, when we took bloods, quite a big swelling developed where we had inserted the needle.

If you notice any of these symptoms, please make an appointment to see a vet: if your dog does have lungworm, the sooner we start treatment, the better the chance of success.

How can you protect your dog?

Prevention is best. Worming monthly is recommended. Speak to us for advice. Peg was not protected at the time she contracted the parasite.