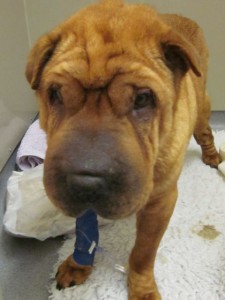 These are all typical clinical signs of pyometra (the uterus/ womb filling with pus), a condition that is not uncommon in middle-aged to older bitches that have not been spayed. We used our ultrasound scanner which confirmed a huge amount of abnormal fluids present in the uterus.

Although pyometra can now be treated medically, surgery to remove the uterus and ovaries (an ovariohysterectomy) is still the quickest, most effective, successful treatment. Therefore, Laila was taken to theatre where we found an incredibly large, pus-filled uterus! 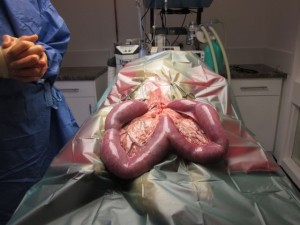 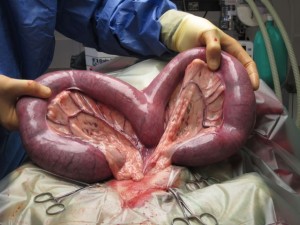 What caused her pyometra?

Laila had been a breeding bitch and had been in season 4 weeks previously. This is a typical time scale for a pyometra to develop.

The cervix (the natural barrier into the uterus) opens during the bitch’s season allowing bacteria to pass into the uterus, and closes again at the end of the season trapping the bacteria inside.

An abscess then forms and grows over the following weeks. Eventually the bitch falls ill when the toxins from the pus leak into the blood stream, causing toxaemia.

Surgery removes the pus and thus the source of the toxaemia and intravenous fluids and antibiotics are also administered to fight the infection. 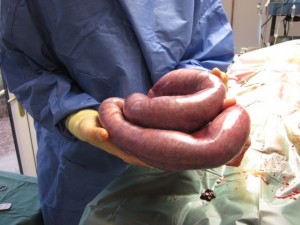 Laila is now once again bright and well, although she will not be having any more puppies!