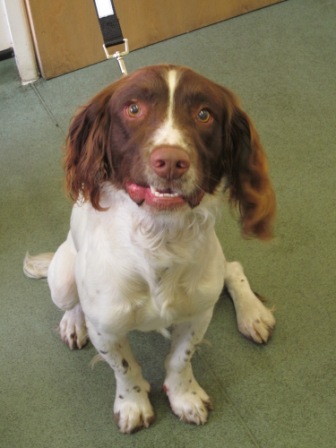 Swallowed foreign bodies are a common cause of illness in animals. They are most often seen in dogs, especially young dogs, but we have also seen cases in older dogs (our oldest patient was 13 years old) and cats. Most items eaten by animals will pass down into the stomach, then through into the intestines where they get stuck. By far the most dangerous  are ‘linear’ foreign bodies – lengths of material (eg string, thread, tights etc) which stretch from the stomach along the intestines and result in a ‘cheese wire’ effect, cutting through the intestines so that gut contents leak into the abdomen causing a potentially fatal condition called peritonitis. Treatment of these cases involves prompt removal of the foreign body (and often sections of intestine as well), flushing the abdominal cavity with sterile saline, and intravenous antibiotics.

Some of the items we have retrieved from our patients include the string from around a roast beef joint, a corn on the cob, an ice cream stick, dog toys and a pair of tights!

Monty, an 18 month old English Springer Spaniel was an interesting case because he was suspected of swallowing a ball but remained bright and well. He had a good appetite and only vomited occasionally. The x-ray clearly showed a very obvious ball in his stomach (not all objects are visible on x ray). Foreign bodies that are too large to enter the intestine from the stomach (like Monty’s ball) often produce much milder or intermittent clinical signs and are easily overlooked because the guts are not completely blocked. Monty was taken to surgery and the ball was removed from his stomach. Surgery went well and he was able to return home to his owners the same day. 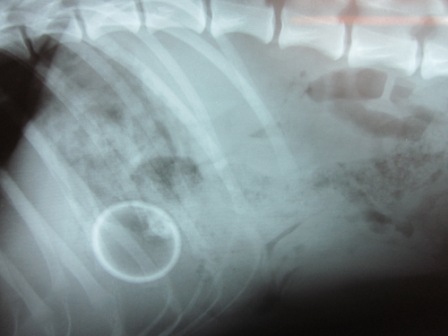