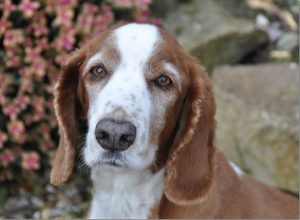 Many Spaniels suffer with ear problems and poor Kai was no exception.  He had had intermittent ear trouble, affecting his left ear more than his right, for around 4 years. Latterly the discomfort had been more persistent and harder to treat and Kai was beginning to show more definite signs of pain and distress. After extended treatment it became obvious that without surgery his life was going to become increasingly miserable.

Common cause of ear trouble

Persistent ear problems are most commonly caused by a build up of infected material in the middle ear, a bony socket sitting deep within the side of the head. It is impossible to clean out the middle ear in a conscious dog. It’s also extremely difficult to apply sufficient medication to penetrate through the debris that has built up in the ear and heal infection.

Many dogs will develop a permanent problem, for which the only solution is repeat ear flushing under anaesthetic, or surgery.

The surgery (known as a total ear canal ablation and lateral bulla osteotomy, TECA-LBO) removes the entire ear canal and the bony side of the middle ear cavity, getting rid of all the infection and damaged tissue in one fell swoop, though it also results in near deafness. Many pets will already be deaf after long term ear trouble, but for those that aren’t, hearing loss is a minor price to pay compared with the pain and distress ear infections can cause.

Unfortunately Kai’s persistent ear infection was caused by a cancer growing at the bottom of his ear canal. This tumour was filling the entire middle ear, had destroyed the bony wall around the middle ear cavity, and was bulging out into the surrounding structures. The surgery was technically very difficult because there are many extremely important structures in this area, including the facial nerve (which controls nearly all the muscles of the face, including the ability to blink), the inner ear (which controls balance) and some very large blood vessels. 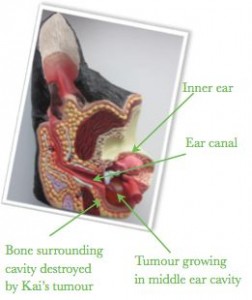 With patient, careful dissection, the surgery went very well but the outcome of procedures like this cannot be certain until the dog has woken up and can be assessed for nerve damage. Kai had some minor balance issues for a few days immediately post-op but recovered fully. He is now a happy, comfortable, bright, lively spaniel without a pain in his neck!