You learn something new… 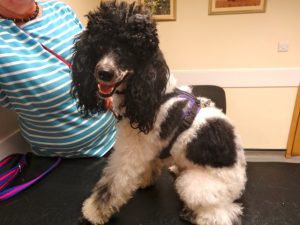 Miniature Poodle Dash came to see Hamish last week, and Hamish was so taken with his markings that he just had to take a photo!  Dash is a parti colour (or harlequin) miniature poodle. He is part of the “patterned” poodles of which there are also brindle, sable and phantom (which have similar markings to rotties). Parti-coloured poodles are much more common in the USA, and they can’t be entered into official dog shows here as they are not recognised as a registered breed by the Kennel Club. All fascinating facts that we didn’t know! Thanks to Dash’s mum for sharing!