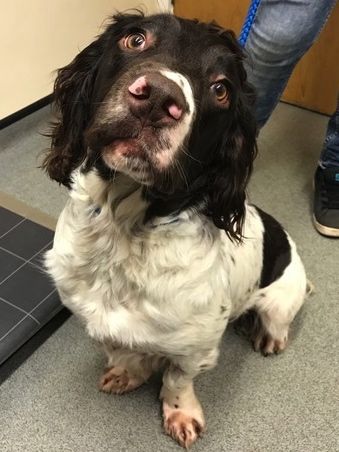 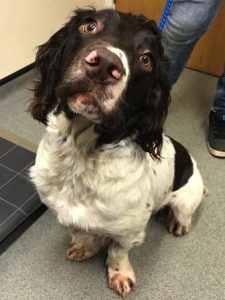 On 23rd December, just as we were are turning our thoughts to Christmas day itself, Bracken was rushed in to us having just swallowed a piece of antler. Many of you will be familiar with the antlers you can buy to give your dogs to chew, and we like to think that, on this occasion, it was a piece of festive reindeer antler. The owner had seen him chewing one minute and then suddenly the antler was gone – it had to have been swallowed. We took an x-ray, and right enough we could clearly see the spiky object in his stomach. It couldn’t be left so we had to operate on Bracken immediately to remove the piece of antler before it caused problems. 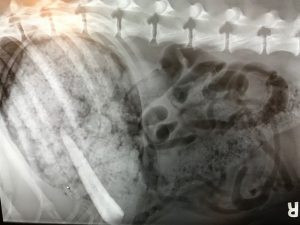 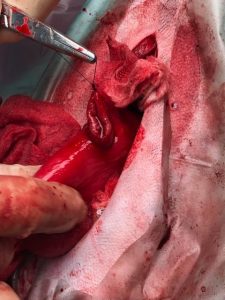 Unexpectedly, because of the shape of the antler, it proved difficult to grasp and remove from the stomach, and the surgeon found that whilst trying to manipulate it out, it slipped back through the cardiac sphincter at the top of the stomach and back into the oesophagus (the tube from the mouth to stomach).

Therefore, to remove the antler we passed an endoscope down the oesophagus from the mouth to locate it and then used a large pair of crocodile forceps to grasp the foreign body and bring it back up and out of the mouth. Quite a joint operation. 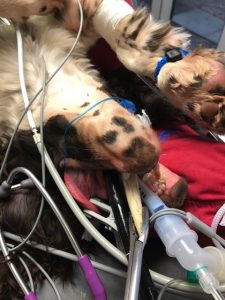 Antler removed from the oesophagus through Bracken’s mouth

Bracken never looked back and enjoyed a happy, comfortable and antler-free Christmas!