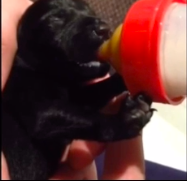 20th May is National Rescue Dog Day, a day for raising awareness about the amazing rescue dogs that are in shelters waiting for a new forever home. Many rescue dogs will have overcome huge obstacles, but can still offer unconditional love, joy and companionship to their lucky new owners.

In recognition of today, we thought we’d share the story of our Registered Veterinary Nurse Renée’s rescue dog Jam. Jam was brought into Renée’s previous practice as an abandoned puppy. The team estimated he was probably only about 2 days old. He wasn’t feeding, was incredibly weak and it was touch and go as to whether he would survive, but Renée volunteered to nurse and feed him to see if he would pull through.

Initially, Jam wasn’t interested in feeding. He was given treatment to stave off infection, and had to be injected with fluid three times a day under the skin to keep him hydrated as he was too tiny for a catheter to be placed in his leg. By day three of fluid treatment, Renée was delighted to see Jam really improve and start to nuzzle and bumble around as you would expect a new born puppy to, and it was at this stage that Renée was finally able to milk-feed him with a tiny syringe. Just a day later he was able to move on to bottle feeding, and here is Jam having his dinner at around 12 days old! Despite a lapse in his progress at around 2 weeks of age, Jam continued to rally amazingly. He now 4 and half years old, 25 kg and a beloved member of Renée’s household. Renée loves the fact he’s a real character, he makes her laugh and she’s never known a dog quite like him!

We’d love to see pictures of your rescue dogs and to find out what you particularly love about your own four-legged rescue friends.