Now that building works are complete, we are reintroducing Pet of the Month as an ongoing feature in the waiting room and online.  Look out for these great stories of 387 Vets’ pet heroes and heroines!

Fred is our Pet of the Month for December 2012. A domestic short-haired black and white cat, he was brought in to us with a nasty bite on his foot.  He was given antibiotics to reduce the swelling, but after several days, he started to develop ulcerated lesions on his body, lost his appetite and was generally very under the weather.  On carrying out blood and skin tests, we were able to confirm that Fred had contracted the feline cowpox virus, an incredibly rare infection in cats and only seen by Hamish twice in his fourteen years in practice. 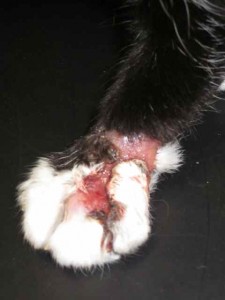 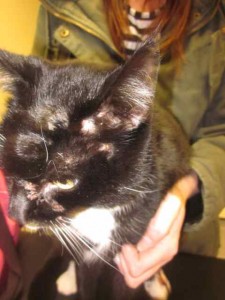 How did Fred catch the pox?

Unlike chicken pox in humans, Fred’s virus is not easily spread. The cowpox virus, an uncommon skin condition which can affect any part of the body, is most likely to be contracted by cats who are avid hunters and come into contact with or are bitten by small prey.  Cattle suffer from the virus, but other known carriers are the bank vole, the field vole and the wood mouse, and cases of cats with the pox rise significantly between July and November when there are lots of rodents about.

Cattle, rodents and the domestic cat are not the only species to contract the virus.  As well as cases reported in cheetahs and occasionally humans, cases have also been diagnosed in dogs, a foal and even an elephant!

After initial infection, it can take between 10 days and several weeks for sores approximately 1cm in diameter to appear. These crust over and disappear as the infection resolves itself, generally after six to eight weeks though some residual scarring may remain.  As with chicken pox, no medical intervention is necessary unless there is a secondary infection or a complication, although some cats who lose their appetite may need intravenous fluid therapy. Generally cats, like Fred, make a full recovery and carry on with the rest of their nine lives intact! 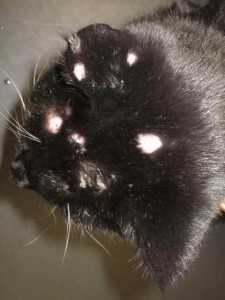