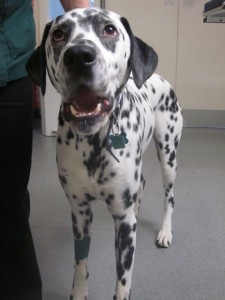 Dalmation Woody had been out on an evening dog walk when he suddenly started sneezing.  However, rather than being a passing reaction, the sneezing progressively worsened after he returned home and he started having nose bleeds.  His owners called Hamish out of hours and were advised to keep Woody settled to see if what could be an allergy might clear up of its own accord.

Although not as severe, Woody’s symptoms were still present in the morning, so the the 6 year old was brought in to 387 Vets for exploratory scoping to identify the root of the problem.

After anaesthetising him, Hamish passed a camera into Woody’s nasal passages where he could just see the tip of a grass awn peeping out from the nasal lining.  The seed was extracted using fine gauge forceps, then Hamish scoped again and located and removed a further husk.  And neither were insubstantial at 2.5cm and 4cm long! 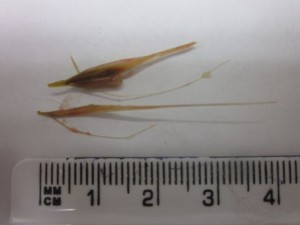 Many dogs (particularly terriers) need to have grass seeds extracted from between their digits, but it’s very uncommon for seed to become lodged inside the nose.

The bronchoscope is a very specialist piece of equipment which is specifically designed for visually examining the nasal passages right down to the airways and lungs.  It is only 4mm wide, but is 68cm long and can be rotated through 180°. Although not required in Woody’s case, combined with the rigid foreign body retrieval device the bronchoscope can be used to spot and remove or dislodge foreign bodies from the back of the throat or the oesophagus (food pipe down to the stomach) – a rare but life threatening problem. 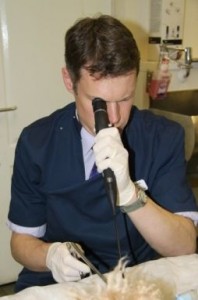