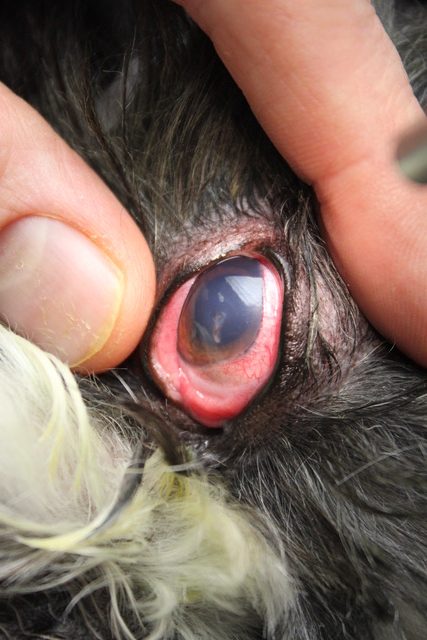 Harry, our February 2020 Pet of the Month, had become suddenly withdrawn and subdued at home, not wanting to go for walks or eat, and his owners had noticed his eye looked inflamed and sore. When we examined him, we could see a small foreign body stuck within the cornea in the front of his right eye. The cornea is the transparent ‘window’ at the front of the eye. It is only about 0.5mm thick and is made up a layer of cells on the front and a layer of cells on the back with parallel, clear collagen fibres in between. The foreign body was stuck within the collagen fibres.

Removal of corneal foreign bodies is extremely delicate and difficult because of how thin the cornea is. If the cornea is perforated, the contents of the eye will leak out (read our December 2019 Pet of the Month Belle’s story at www.garrym19.sg-host.com/blog). However, leaving a foreign body within the cornea is also dangerous because it can cause significant corneal degeneration and the foreign body can migrate, even into the eye itself.

Under general anaesthesia, and using binocular loupe magnification glasses, we were able to carefully excavate the cornea and remove the foreign body, which turned out to be a tiny piece of thorn. Amazing that such a tiny object can cause so much discomfort. Harry would have felt a great sense of relief after it was extracted, and we too felt great relief as the procedure had gone so well.

When we saw Harry again only a few days later he was so much happier and more like his normal bubbly self. We’re delighted his corneal damage has now fully healed.